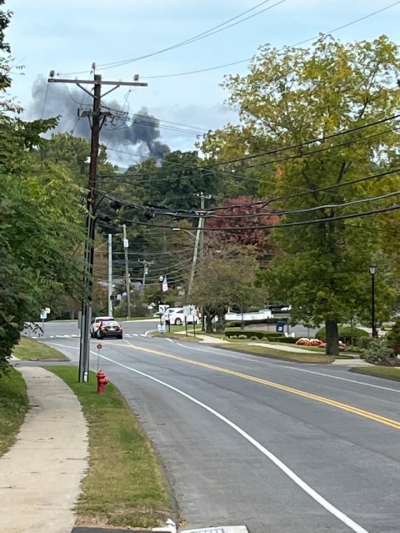 WVFD sent Eng 5 with a crew to the scene of a structure in Heritage Village, The crew assist with exposure control in an adjacent unit. The WVFD is always willing to assist a neighboring town when c...
➜
New Years Day Fire - Guts home

The Hotchkissville Fire company was organized May 20, 1924.  R.L. Smith was their first Chief. E.L. Bryant was the Assistant Chief.  The original "station/meeting'  place was the "Old Mill" owned by Mrs. Friedman of New Jersey.  They had chemical cart, which was the fire truck of that time period,  that was also stored at the mill.  They held dances, socials, strawberry dinners and even a play or two.  They H.F.D. was a very intricate part of the village.

The Hotchkissville Firehouse was originally a one-room schoolhouse, in a thriving industrial section of Woodbury.  With the mill closing, the shear factory burning down and the school children going to a centralized school,  the school house was closed.  The village of Hotchkissville tried to keep up with the needed repairs but it was a costly venture for the small village.  The building remained empty and used for a small village gathering from time to time.

Now a residential area, Hotchkissville is recognized as an important historical district, with its neighborhood firehouse prominently located.

Please take a moment to watch - This video could save your life.

So You GET There.

WVFD is on air during Fire Calls

Listen in and hear whats going on

We would like to know what you think of our site.

We gladly take all suggestions.

Member login
Birthdays for December
1st Jeanne Lyle
2nd Tracy Murphy
8th Ben Kiessling
8th Dan Kiessling
11th Nick Kiessling
16th Robert Start
17th Jennifer Jeffrey
20th Chris Start, Hotchkissville Co.
22nd Travis White
23rd Ron Burdick
Links
Homeland Voice
Dennis recently launched this new website dedicated to homeland security. As Dennis wrote us: "The Firefighters and First Responders have a more than dangerous profession, but the strength of the new possibilities place us in an untenable position, balanc...
Pleural Mesothelioma
Pleural mesothelioma is the most common form of mesothelioma. Among other issues, fluid buildup in the chest cavity can cause serious pain and discomfort for patients. Symptoms of pleural mesothelioma may include: Shortness of breath Inability to ...
Connecticut Forest Fire Danger
This link will advise you of the Forest Fire Danger as set by the DEP. If you wish to obtain an Open Burning Permit you must call the Fire Marshal, Monday - Thursday between the hours of 7:30am - 5:30pm to be placed on the scehdule to burn. Burning ...
The Association of the Woodbury Volunteer Fire Department
25 Quassuk Road
P.O. Box 561
Woodbury, CT 06798
911
203-263-3100
Map
Directions

This site has been viewed 585,104 times.
Calls
News
Events
Pictures
Apparatus
Maintained by the members and staff of The Association of the Woodbury Volunteer Fire Department. Designated trademarks and brands are the property of their respective owners. Copyright © 2006-2022. YourFirstDue Inc. All Rights Reserved. Content on this web site is supplied by The Association of the Woodbury Volunteer Fire Department. YourFirstDue Inc. cannot be held responsible or liable for any content, text, pictures, or any other media found on this web site.
Management login
Powered by

YourFirstDue.com
Websites for Fire and EMS
© 2022 The Association of the Woodbury Volunteer Fire Department